Near a small village called Rose, there are three most impressive Submarine Tunnels which were built by the Yugoslav Army. The outside of the opening is designed and covered by fake rocks so they would not be invisible to satellites or spy planes. One of the tunnels is out towards the open sea and Mamula island, the other two are about 1-2 km towards Tivat direction. There are also a few abandoned Yugoslav Navy ships around.  All tunnels are dead ends, so you cannot swim through, but you can swim to the end and back. You can also walk alongside and explore on your own. It is pretty dark at the end, so having a flashlight helps. There are also other walking tunnels diverting from the main submarine tunnel. Get off and explore the secret tunnels, go for a swim or if you are truly brave- dive off from the top of the cave into the sea.

Length: around 100 metres and you can swim to the end. Depth: about 10 metres. 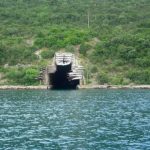 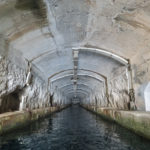 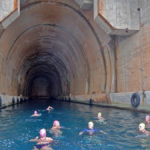