Mamula (also known as Lastavica) is an uninhabited islet in the Adriatic Sea, within the southwestern Montenegrin municipality of Herceg Novi. Mamula is located between Prevlaka and Luštica peninsulas at the entrance to the Boka Kotorska Bay. This small islet is of circular shape, and has 200m in diameter.

During the period of the Venetian Republic rule, the island was known as Rondina. The island has a fort, built in 1853 by Austro-Hungarian general Lazar Mamula. The fort takes up about 90% of the island's surface area. Along with the fortification on Prevlaka's Cape Oštro as well as Arza fortification on Luštica's Cape Mirište, both of which were erected at the same time also on suggestion by general Lazar Mamula. Fort Mamula was part of the Austro-Hungarian Army's contingency plans of preventing the enemy entrance into Boka Kotorska.

During World War II, from 30 May 1942 onwards, the fascist forces of Benito Mussolini's Kingdom of Italy converted the Mamula fort into a concentration camp. The concentration camp was known for torture and cruelty to prisoners. Most of the camp's prisoners came from the neighboring area.[1]

In early January 2016 the government of Montenegro, over the objections of those who were once imprisoned on the island, approved a plan to convert the site of this former concentration camp into a luxury beach resort . 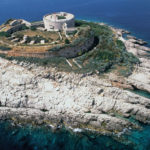 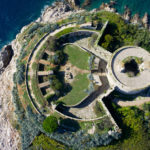 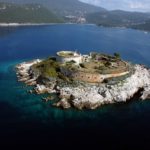