LAKE SKADAR is the largest lake at the Balkan Peninsula, with fresh water and one of the largest national parks in Montenegro. The size of the lake is 379 sq. km of which 222 sq. km belong to Montenegro and the rest to Albania. The Lake Skadar basin is 28 m below sea level and its surface is 6 m above sea level which makes it the largest crypto-depression in Europe. During heavy rainfalls the water level of the lake rises and floods a significant part of the surrounding area. Its greatest depth is 44 metres. Lake Skadar is supplied with water mainly from the rivers Morača and Crnojevića Rijeka, while the Bojana River (44 km) is its outflow. But it is not only the water and the climatic influence of the Mediterranean that the Bojana River carries. It used to carry goods and cultural inspirations that influenced the architecture, arts, printed words, ways of earning money, and life in general. The living world here is very rich and heterogeneous, both in the water (22 species of fish) and above its surface (279 species of birds), as well as in human settlements along the coast. It’s extremely famous for its diversity of flora and fauna. Lake Skadar is included in the Ramsar List of Wetlands of International Importance for its rarity. An interesting fact is that the seagulls – seabirds nest on freshwater island in Lake Skadar. The rare Dalmatian pelican has become a trademark of the lake too. Lake itself is unusual for mutual vicinity of different living areas and their chain of feeding. It’s a blissfully pretty area encompassing steep mountains, island monasteries, clear waters, and floating meadows of water lilies.  There are some fifty islands in the Lake Skadar, some of which are well known for their very old and important cultural monuments. The Isle of Moračnik is famous for the Church of the Holy Virgin built during the rule of Balša III, between 1404 and 1417. On the Isle of Starčeva Gorica is the burial site of Vojvode Božidar Vuković - Podgoričanin, who had books printed in Cyrillic in Venice from 1519 to 1538 and there are medieval churches on the islands of Beška and Vranjina. In the region of Lake Skadar there are 20 monasteries, churches, villages, fortresses and sacred monuments. This lake is a witness of Montenegrin history from 11th century up to now. Around Lake itself there are 18 important historic sites.

One of those sites is Lesendro, a fortress ruin on the lake. The fortress was built in 1843 to ward off the invading Ottoman Turks on what was originally an island. The island was captured by the Turks in 1843 and further fortified. King Nikola Petrovic Njegos wanted it back so badly that now there’s a saying in Montenegro: ‘to long for something, like the bishop longs for Lesendro.’ He tried to take it back several times and finally succeed in 1878. The island became a peninsula when the bridge was built for the railway that links Belgrade (Serbia) and Bar on the coast.

Grmozur is another interesting site, known locally as ‘Montenegrin Alcatraz’. It’s also known as Snake Island. The island has the ruins of a fortress on it that was built by the Ottoman Turks in 1843. It was turned into a prison for non-swimming political prisoners once the Montenegrins liberated the area in 1878. Interestingly, guards on the island also couldn’t swim. It was damaged in an earthquake in 1905 and has fallen into ruin ever since. These days it’s also known as ‘Bird Island’ and it’s a good spot to see some of the lake’s resident birds. 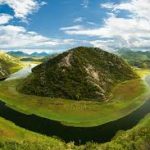 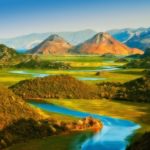 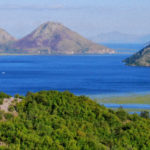 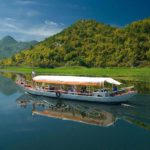 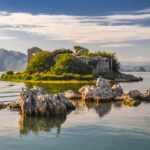 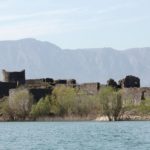