HERCEG NOVI is the city of sun. It is located at the entrance to the Bay of Kotor and at the foot of Mount Orijen. Characteristic features of Herceg Novi are its parks and garden swith rich exotic greenery with numerous plant species of foreign origin that captains from Herceg Novi brought from their long journeys: palms, eucalyptus , cactuses, aloes, magnolia, agave, bananas and other Mediterranean and sub-tropical plants.

Herceg Novi was founded in 1382 by King Tvrtko I Kotromanic. The aim of foundation of the town was achievement of trade connections with neighboring states and salt production. The fortresses inside the bulwarks of the Old town testify of the tumultuous history of the town, Spanjola (XVI century), Citadela, Forte Mare (XIV century), Kanli-kula(XV century), Forte Fortress (XVII) as well as the Sahat Tower (XVII), and of course numerous palaces and churches.

Today, Herceg Novi is the city of writers and artists… The town also has artistic galleries, national library, city archive etc…And the old fortresses are now the summer stage for traditional film, music and theater festivals. The Old Town is also characteristic for its stairs, which are often, very long and tiring for climbing or walking, but also precious as special kind of recreation. Most of the churches in the old city core belong to the cultural heritage of the second millennium and have rich treasuries. The local museum is one of the richest institutions of this type in Montenegro. In the botanical collection there are over 100 species of Mediterranean and subtropical flowers. It also has a rich archaeological collection with objects of prehistory from the area of ​​the city and its surroundings. The ethnological collection presents amphorae, old ships and objects of folk art,as well as tools used in agriculture, animal husbandry, machinery, and a great collection of icons, mainly works of old Kotor iconographers, is also exhibited.

SAVINE WINERY At the entrance to the Bay of Kotor, above Savina Monastery, lies the winery of Obradovic family, with their sun-soaked vineyards today bearing fruit much like they did back in the 18th century. In the Republic of Venice land register map dating back to 1753, the family discovered that their estate was called ‘Villa di Meljine’ with the entire stretch of Savina planted in vineyards and known as ‘terra vignata’. This was an additional reason to embark on the renewal of the tradition so they have carefully picked the finest grapes from their vineyard and have nurtured the wine in French oak barrels and these efforts have resulted in top-notch quality SAVINA wines.

THE SAVINA MONASTERY complex comprises two churches, the Small and the Large Church, both devoted to the Ascension of the Virgin Mary, as well as a small, separate church of St Sava, on a nearby hill, which gave the complex its name. The Small Church dates back to the 15" century and a number of layers of fresco painting has been preserved in it. The Large Church (in the foreground) was built between 1777 and 1799. 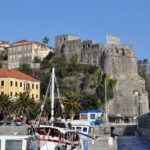 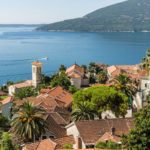 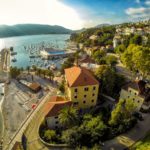 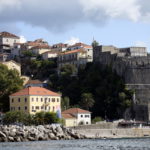 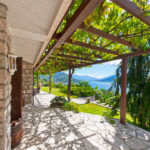 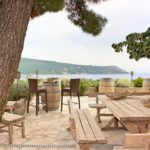 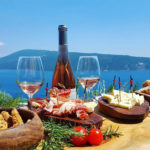 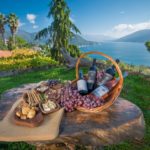